Reaching for the Transcendent

How does art come to exist? There are often times in the creation of my own artwork and in the study of other artists where the unbiased observer or art critic is able to distill a more resonant meaning or purpose of a given artwork than even the artist themselves can produce or understand. Occasionally, the meaning produced by the observer might paradoxically surpass that which was produced by the original creator. There is typically an unspoken assumption that the creator of a given object knows best the characteristics that define that object because they are the one who brought it into existence, and in doing so must necessarily be aware of every possible characteristic that gives definition to the object. In most circumstances, it seems obvious to assume the predominance of the creator’s voice, but such an assumption relies on an easily deconstructed axiom that a creator is fully aware not only of the total sum of all the forces that created their artwork but also of the forces that created themselves. If the forces of creation within the individual remain alienated from that creator’s awareness, than the idea that the individual is unable to recognize the metaphorical qualities of their own creation is not such an absurd proposition.

The artistic praxis is an expressive attempt to overcome the universal alienation that is fundamental to the phenomenon of being human: the problem of subjects and objects. My claim is not only that the inability to recognize the cause of art’s creation a crucial element of art as a unique expressive medium, but it is also that the maddening feeling of alienation of the subject from objects and other subjects is what makes art possible in the first place. One implication of alienation is that the creator does not necessarily have to function as the most predominant voice within the artwork because artistic creation produces an object in the truest sense, manifesting into the actual world an object that fetishizes (embodies) the inherent alienation between subject and themselves. The artistic object is in some sense sublime because it makes material that which is initially purely cognitive, phenomenological and metaphorical in content. Art practice is merely another one of humanities failed attempts to overcome the problem of subjects and objects, but in these failed attempts, individuals are able to produce things of beauty or creations that resonate with the unconscious.

The artwork identifies the liminal space between subject and object. It is a Pandora’s box, that when opened merely reveals the infinite metaphorical features that comprise it, an infinity that implies the equally real and unreal quality of all things – the petrifying ontological plateau encountered through psychoanalysis, trauma, the death of god, religious experience, etc. – thus calling several preconceptions about meaning and truth into question. The traditional understanding of truth is an ideological misconception that a finite point exists along the infinite continuum of possible objects that can resolve, in itself, the origin, purpose and meaning of all those infinite objects if it is applied correctly by the enlightened individual. Art is a reaction of regurgitation from the subject upon encountering, on some level, the fallibility of this truth concept, a concept which promises to fill the void of objects when it is instinctually understood, especially by contemporary philosopher Slavoj Zizek and other Lacanians, that the object itself, and even the subject, is the void. The meaning of an artwork cannot be claimed by any individual subject – even its creator – because what the art piece is is a complex amalgam of interactions from objects trapped in the signifying web producing a unique sublime object that tries to transcend its object prison. The artistic process is a symbolic one representing the common desire of an individual to understand themselves, to ultimately bridge the gap opened up by ineffable negativity which later produces internal alienation of the subject from themselves. 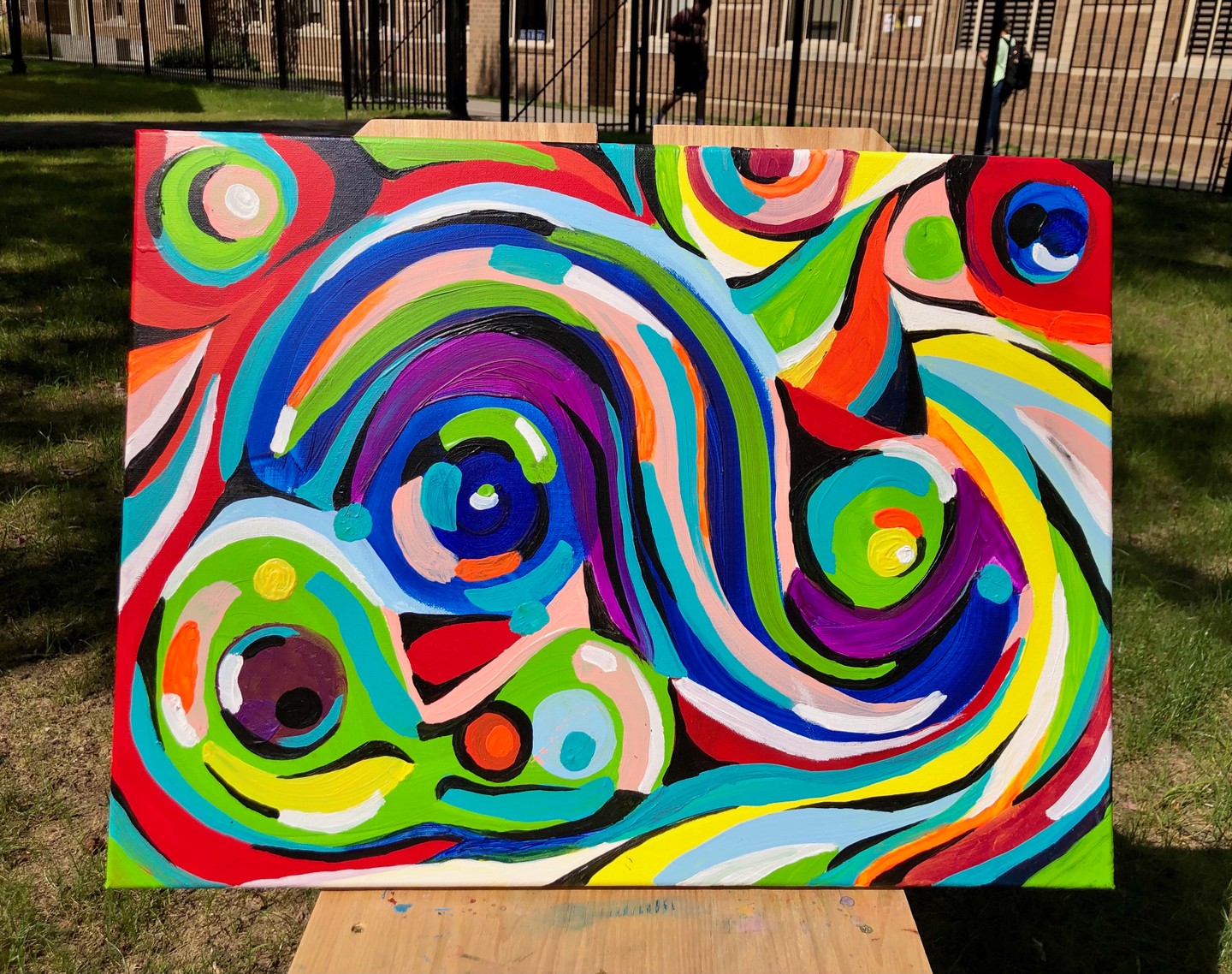 In order to further this discussion, humor the notion that epistemology can be roughly broken down into three distinct parts: the information which the individual claims to know, the information which the individual claims to not know and, most mysteriously, the information which the individual cannot claim to either know or not know due to their inability to recognize the information or even acknowledge the existence of that information. These distinctions in the features of one’s personal relationship with knowledge are important for developing a coherent sense of self, because, understanding that which is not part of your knowledge system is absolutely essential for determining what is and vice versa, an insight similar to that which is obtained by going through the Hegelian dialectic of negation. For a moment call upon the commonly used icon of the ying and yang. If knowing is positive and not knowing is negative, then one must recognize that the positive element of the binary can only exist because of the negative element from which it is compared against – the positive containing a piece of the negative and the negative a piece of the positive – and it is this mutualistic comparison that imparts the phenomenon of identity onto objects and subjects. If an individual were to define themselves as a scientist, they are capable of doing so because, in their daily life, they do not practice an infinite amount of other professions whether that be accountant, lawyer, banker, etc. The foundational French psychoanalyst Jacques Lacan states, “the truth arises from misrecognition,” because only in realizing one’s finite limits through the process of failing to surpass those limits is the individual capable of identifying the abstract boundary lines which defines the psychological perimeter of the self, or the subject as uniquely distinct from surrounding objects. But this binary between knowing and not knowing, which is primarily structured to the unique human phenomenon of spoken and written language, does not include in it the most deceptive, yet most important part of the previously mentioned epistemological triad: that which is unknown due to a complete lack of awareness of that knowledge’s existence.

Language is a useful tool to humans because it allows the individual to more coherently navigate the perplexing epistemological soup of knowing and not knowing, but this system itself has limits that it cannot overcome on its own and said limit manifests in the form of the unknown unknown. It is impossible to logically or rationally convey an idea to another individual – or even form that idea within the mind in the first place – without the use of the logic of language, and yet humans experience so many things on a daily basis, both internally and externally, that can only be described as ineffable. The unspeakable nature of these moments is shared whether they take on the form of religious experience, artistic inspiration or psychotic delusion. Despite their traditionally absurd features, these kinds of experience, at least phenomenologically, belong to the same status of reality of normal experience or of an even higher order, if the individual is being honest about their experience. If such a predicament is truly the case, with what method then are humans able to confront the unapproachable parts of their existence, that are fundamental in constructing the psyche, without the most reasonable, logical method of linguistic analysis? My simple answer to this question is art.

The dimensional plane that transcends the limit of language and thought is the third part of epistemology and can only be communicated with through artistic praxis. There is no requirement to think with logic or declaration when creating art, especially in particularly expressive media like action painting and performance art, which means that the subject can temporarily immerse themselves in an experience that is partially capable of transcending the logic of language, a feature of human existence that paradoxically both elevates progress but binds the soul. Art allows the subject to briefly liberate itself from the structural frameworks that prevents its unification with that which escapes it, the sublime. Each and every individual tries to reach for the sublime in their daily lives and each and every one continues to approach it while ultimately missing it. Why is this the case? The sublime would not be identified as such if it were within the reach of human hands which means its most crucial feature is the inability to understand it. When one thinks they have reached, the illusion of truth shatters and that individual realizes that what one thought was a finish line is merely another starting line. Art must fail, but that in that failure is the art.

Maxwell Schenkel • BC '22
I am senior undergraduate at the Morrissey College of Arts and Sciences of Boston College majoring in Neuroscience and Studio Art. I have been engaged in art practice since middle school but became se... Read More on Maxwell's Cubby
Share
More Blog Posts
Copyright 2020-2021 Domenico Ottolia. All Rights Reserved.